Allons-y to Paris! We continue our promenade around the fashion capital of the world in search of vegan delicacies that are equally à la mode. We left off last time with a few affordable vegan choices around the city but this time we are going to explore more tasty vegan restaurants that are a little bit pricier. While you stay in the city of glamour and elegance, why not indulge on food that tastes as beautiful as it looks?

Walking along Boulevard de la Bastille, one can see the traditional mid-19th century Haussmannian buildings (named after architect Baron Georges-Eugène Haussmann) with its white stone façade, framed windows with black gilded iron terraces, decorative stonework, and mansard roofs with attic rooms lit by dormer windows. This all seems to be the typical, and yet beautiful, architecture that makes up most of Paris. But, as you walk south on this street towards the river Seine, you come across the fabulously chic Gentle Gourmet Café, an all vegan restaurant that boasts to be the House of Vegan Gastronomy. At first glance, it looks like a contemporary restaurant transplanted from Rodeo Drive. As you walk inside, the minimalist décor of white and black is placed intentionally to better showcase the vibrantly colored and artistic food that comes out of the kitchen. The menu is crafted to be seasonal by only using the freshest ingredients available.

While I visited there, the artichoke entrée was my choice. As le garçon brought the plate over to my table, I was completely stunned by the dish’s presentation. It was almost too beautiful to eat. Almost. But after looking past the artistic interpretation on my plate, I took a bite of the artichoke and was surprised to taste the tenderness that one might expect from a lamb chop, with all the similar seasonings like fresh rosemary and thyme to accompany the dish. And after the main entrée, I indulged in what this restaurant is best known for – its vegan croissants and macarons. 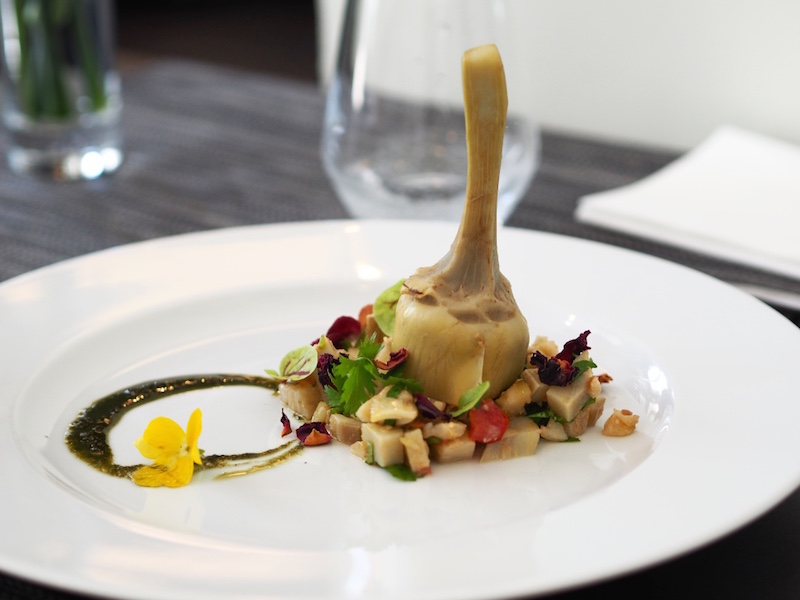 At first I thought I’d simply misread the menu, but in the dessert section were croissants, macarons, house-made ice cream, and so many other traditional French pastries that I once thought were impossible to veganize before coming here. The average entrée is around 20 euros, so this place is a bit pricier but if you are in the mood to indulge and get the classic, French cuisine you expect when visiting Paris then this restaurant will not let you down. In fact, with the artsy presentation of the food you feel like you are getting a Michelin star meal for your buck. And not to worry, the staff speak plenty of English to help you make the best selection from the menu. I’ve included the metro stop and metro lines to take to get here and if after lunch you want to see even more classical art I’ve included metro directions to la Musée du Louvre so you can enjoy the masterpieces of DaVinci and Michelangelo after you have your own edible masterpiece.

The next Vegan restaurant on my list is Le Potager du Marais. This quaint restaurant has all the French-countryside charm you’d expect to find in the villages of Rochefort-en-Terre or Lourmarin. Yet, Le Potager brings the country aspects of Provence to the big city. At first sight, it’s easy to walk by this little place. There’s nothing about it that makes this restaurant jump out and compete for your attention. In fact, it does the opposite by almost blending into the scenery. The restaurant is covered in lush green plants with French doors that open the café onto the patio, and the windows are draped in green and white checkered curtains. It has that shabby chic vibe but with a more down to earth color palette. However, what attracts your attention to this place is how busy it is. When open, this restaurant is bustling with people that fill what little seating the restaurant has to offer, which is why it’s suggested to make a reservation on their website. 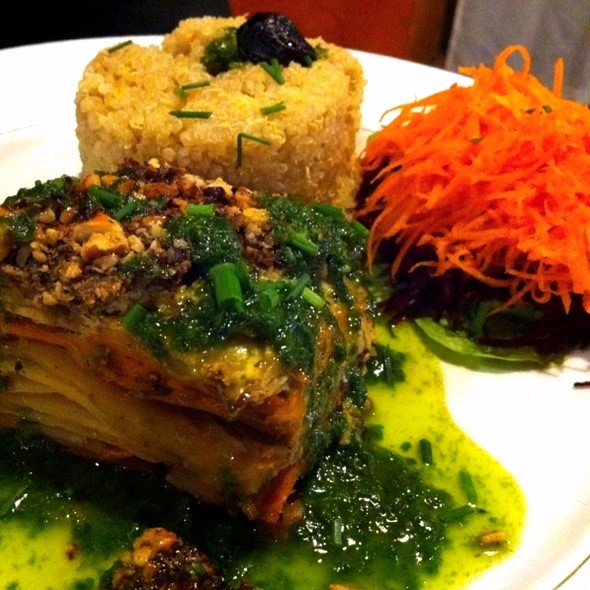 As I sat down, surrounded by families and other foodies like myself, I ordered the Lasagnes aux épinards and the Gratin aux légumes. My first choice was a spinach lasagna that did not fail to reinterpret lasagna into a healthy dish. With a rich creaminess derived from tofu and milk substitutes, this lasagna didn’t even need cheese. The fresh spinach and the creaminess of the sauce gave a closer interpretation to that of a pesto and alfredo mix instead of the traditional red sauce in lasagnas. Yet even with this delicate switch, the Italian flavors of oregano, basil, rosemary, thyme, and garlic came through. My second entrée was the baked vegetable dish topped with a browned crust made from breadcrumbs. The star of this dish was the eggplant. No. It was the red bell pepper. No. It was the thinly shaved pieces of potato layered in a stack. Okay, so everything about this dish was amazing. But don’t just take my word for it. Give it a try yourself. And to top off this wonderful meal I had the vegan chocolate lava cake. That’s right. Vegan chocolate lava cake. Did I make you just drool a little there? No worries, because I did the exact same thing when I saw this beautiful dish brought out to me dusted with powdered sugar and topped with cranberries. C’était magnifique. These classic dishes reminded me of a home-cooked meal or better yet a vegan version of your grandmother’s cooking. The average meal here is around twenty euros, so prepare to pay for a vegan take on one of your favorite traditional meals.

And if you still have some energy after eating this indulgent meal, I recommend taking the metro to Les Galeries Lafayette to do a little shopping in one of the fanciest malls I have ever set foot in. This mall has rooftop access with a café and seating so you can take in a beautiful view of the city in style. But if shopping isn’t your thing, don’t worry. Right in front of Les Galeries is the opera house, Le Palais Garnier.

This magnificent opera house is open to tour during the day for ten euros. If you love art then this is the place to come to see the statues out front made by Jean-Baptiste Carpeaux or the ceiling painted by Marc Chagall. After all, this is the opera house that inspired The Phantom of the Opera, and with the luxurious marble grand staircase you can see how it’s beauty would inspire a Broadway play.