When you think of food in Paris, what words come to mind? Richness? Decadence? Expensive? How about healthy? Or dare I say, Vegan? Is it even possible that the land of le croissant and la beurre can make a single dish without any meat or dairy? Upon my travels to Paris I happened to have found a growing little niche of vegan restaurants popping up in the City of Light competing and challenging la cuisine traditionnelle.

But these restaurants are not the typical cafes lining La Rue Champs-Élysées, competing for tourists to dine during shopping sprees. These restaurants are the ones that are tucked away, carefully hidden behind narrow cobblestone roads and back alleys, where only the locals eat. If vegan is good enough for the locals, then you can bet it’s good enough for me and you. Leave it to the French to create vegan dishes that seduce your eyes and steal your hearts.

y first suggestion is a little burger shop called Hank Vegan Burger. It might sound a little ridiculous to travel all the way to Paris to dine on American cuisine, but trust me you won’t be disappointed. After getting off the metro and walking past a couple of boulangerie and pâtisserie shops, I came across the black door that leads into Hank’s. You can peek in through the little street window and see the chef assemble the burgers with finishing touches like cornichons and tomatoes that come from gardens on the outskirts of Paris. 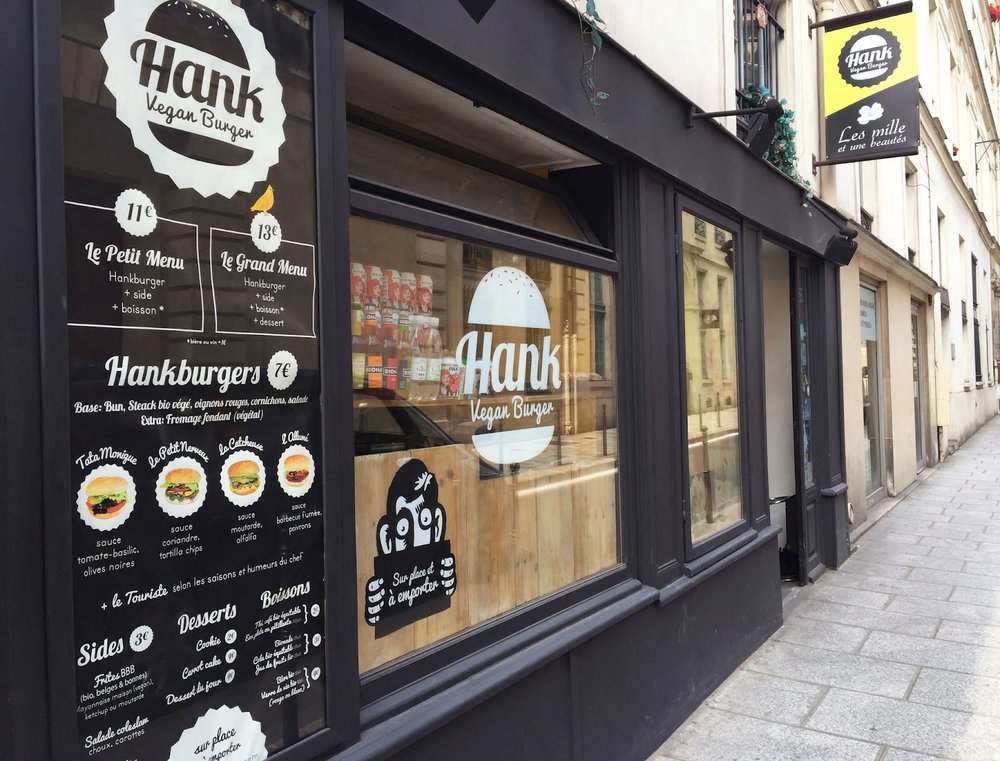 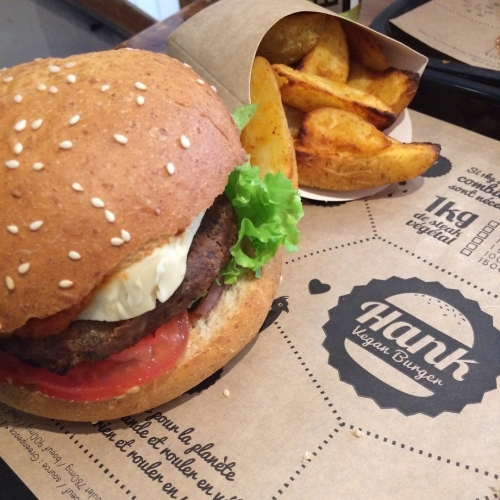 Inside, the radio is slightly drowned out by the sound of pans clinking and knives chopping that come from the kitchen counter which is visible as soon as you enter. You approach the counter and place your order to the friendly staff that speak English with an accent. And after you order, you walk up the narrow stairwell and find seating upstairs. Under a low ceiling, a few small tables and one large communal table with benches are arranged for customers. Once your order is ready, your name is called and you begin to taste something that is unbelievably vegan. The burger patties range from mushroom to soy but it’s their delicious made-in-house sauces that give each burger its distinctive taste, from a sweet and smoky BBQ sauce to a spicy southwest mayo. And the sides are just as enjoyable as the main course.

The French fries are baked to a crisp in direct fire to give the same crispness as frying them in oil but without all the fattiness from a fryer. And the coleslaw salad is a carrot and cabbage interpretation that reminds you of a backyard summer barbeque. And if you still need a little something extra, the vegan chocolate chip cookies and vegan carrot cakes are just as tasty with subtle hints of cinnamon and nutmeg. Another great thing about this place is the budget-friendly pricing where a burger, side, drink, and dessert will only cost you 14 euros or 12 euros without a dessert. But why give up dessert? If you walked as long as I did to find this hidden gem, then you definitely walked off the calories to earn it.

While you’re in the area check out these free nearby attractions. Did I mention they were free? Le Jardin Anne-Frank (Anne Frank Garden) and with a quick Metro ride you’re right at La Cathédrale Notre Dame de Paris (Notre Dame). I’ve included metro directions from the restaurant to the church down below.

But when I think of France, I think crêpes. And when you or someone you know is a vegan, our vegan little hearts sink when we hear that traditional crêpes have so much milk, butter, and eggs. It’s almost impossible to find good replacements for those ingredients, let alone a good replacement for such a classic dish. But leave it to the French to find a way – a delicious way that is. My next find is a little restaurant with big aspirations to preserve traditional French cuisine by veganizing it. It sounds like a miracle when you say there is a place that makes Vegan crêpes. And yet, a miracle it is. Just over in the next arrondissement is a restaurant called Loving Hut where France’s signature dishes have been transformed into meat and dairy free masterpieces. This is evidenced by their amazing Crêpe aux champignons (Mushroom Crêpe). 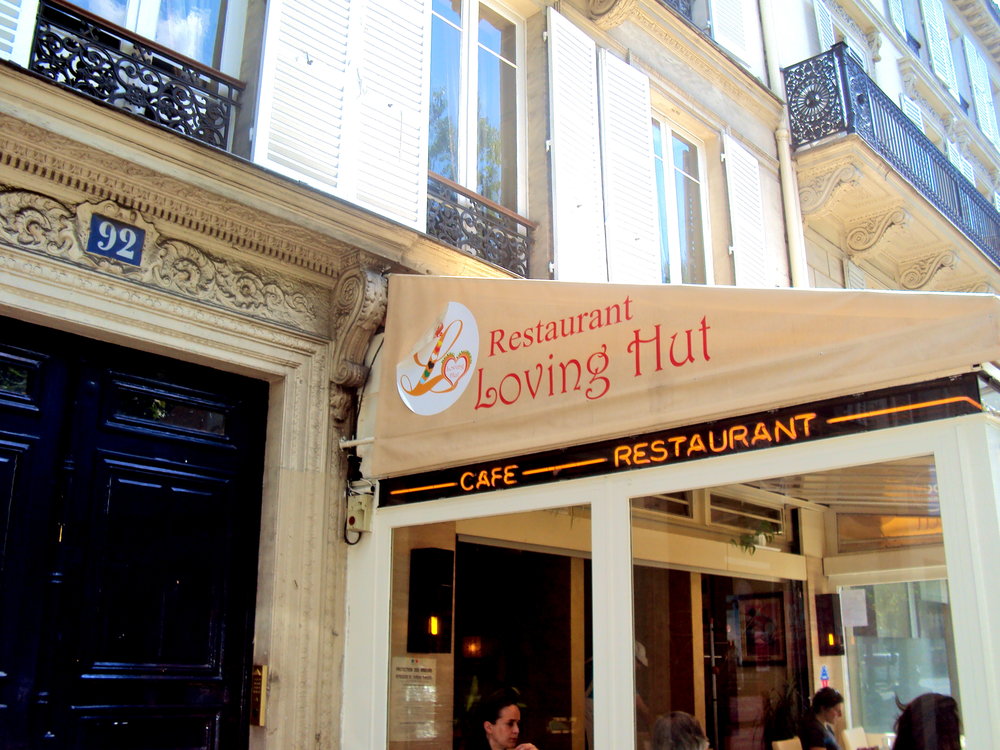 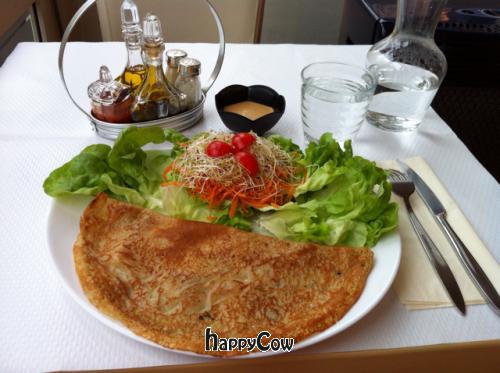 With a menu that changes weekly, you are bound to find one of your favorite dishes being offered at some point. But let’s get back to that noteworthy crêpe. This delicate, almond flour, soy milk concoction gives a subtle hint of nuttiness that complements the mushrooms. But these aren’t ordinary mushrooms. These are chanterelles mushrooms, once considered a high delicacy that only nobility could afford to eat. So, if you are one who doesn’t like mushrooms, wait until you try this dish. The chanterelles might change your opinion on mushrooms all together. These mushrooms offer a woodsy/smoky aroma that smells like it was cooked in a wood-stove oven, and the body of the mushroom is thick enough to be a good texture and taste replacement for meat. With one vegan-buttery bite, the thin crispy crust of the crêpe melts in your mouth and the mushroom and sauce concoction is unlike any other. Once you’ve had your authentically French crêpe, you can move on to their desserts like vegan cheesecake or a vegan pear tartelette. Prices do range here with entrees averaging about 15 euros and desserts around 7 euros, but if you have a little extra money to spare then this place will satisfy every taste bud while still being vegan friendly.

And while you’re in the neighborhood, just right down the road is La Musée Nationale Picasso (Picasso Museum). So, while you munch on a vegan masterpiece don’t forget to go look at Picasso’s masterpieces to top your day.

Stay tuned for Part 2 of this Vegan Eats to discover a couple more local places to eat in Paris.