Whenever I think of good southern comfort food, I’m easily reminded of Charlotte, North Carolina. And North Carolina loves to boast about its heavenly BBQ. My dad and his family live in Charlotte, so I’ve had many wonderful opportunities to try all the delectable vegan eats in this beautiful southern city. So, come on y’all. Let’s get our eat on!

Now for that southern food. My first recommendation is Bean Vegan Cuisine, which is a vegan restaurant offering home-style meals like sandwiches, green plate specials, American-fare burgers, daily desserts and even something deliciously called the mac n cheese hash. I enjoyed the buffalo mock chicken sandwich with fries and a chocolate cupcake for dessert. The mock chicken they use here is a soy-based product that closely resembles the texture of real chicken. And the buffalo sauce is made in-house and deliciously reminds me of real buffalo chicken wings. And if that’s not southern enough for you, then make sure to try out their fried pickles. They are everything you didn’t know you needed, that’s how delicious they are. If you are looking for good deli food or American favorites, then this is the perfect place for you. And they are very affordable, where an average sandwich, fries, and drink will cost you about $10-$13.

Fun Fact: North Carolina is where the Wright Brothers took flight for the first time. Make sure to check out the Carolinas Aviation Museum in Charlotte to see the first planes ever used by mankind. 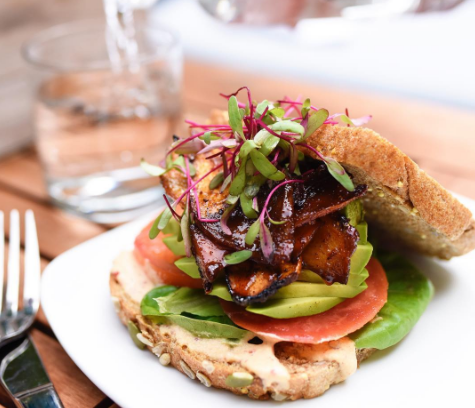 My next recommendation is a vegan restaurant called Living Kitchen. This place serves contemporary vegan cuisine as well as mostly raw food. They also have a wide selection of smoothies, juices, and nut and seed milks. The style of dishes range from Vietnamese, American-Italian, and of course, classic Southern-fare. While here, I ordered the BBQ sliders, because you can’t go to the South without eating good BBQ. Just make sure to check out and try this vegan version of BBQ. The BBQ sliders are made from locally sourced oyster mushrooms roasted in a smoky BBQ sauce topped with a pear, green cabbage and jalapeno coleslaw and served on two classic slider buns. This dish was amazing as it was super tender yet still had that smokiness from the sauce and the mushrooms. I especially enjoyed the coleslaw because it had a sweetness from the pear and a little kick of heat from the jalapeno. I also ordered the Broccoli Waldorf salad since this was one of my favorite dishes before I became vegan, so I was very excited that they offered a vegan version here. This salad is made of broccoli, green apple, celery, walnuts, raisins, and red onions tossed with their homemade cashew mayonnaise, served with avocado and sun-dried tomato sesame crackers. The BBQ sliders are only $10 and the Broccoli Waldorf salad costs $12, but you can easily add a veggie burger or Portobello falafels to the salad for only $5. If you are up for some adventure, then I highly recommend going to the U.S. National Whitewater Center. This outdoor recreation center is an athletic training facility for whitewater rafting, kayaking, canoeing, rock climbing, mountain biking, and hiking. However, you don’t need to be a serious athlete to enjoy this place, as there are lots of beginner options to fit your athletic skills. They also have a zip line you can go on that is above the whitewater river. I’ve been here a couple of times and I’ve done so many different things ranging from paddle-boarding, adventuring on the rope bridges in the forest, and rock climbing.

Make sure you don’t skip this southern city because you can easily find delicious vegan eats as well as some adventures in North Carolina.