Europe is a favorite holiday destination for Americans. Over the summer, 20% of tourists in Europe are from the US. So, if you are thinking about traveling to Europe this summer, I hope the last blog on Amsterdam inspired you a little to travel there and I hope that with this week’s blog you’ll consider adding Munich to your Eurotrip, especially if you want delectable vegan eats.

Munich is a charming city that captures the quaint, small village vibe you’d expect visiting a European town. In German, München (pronounced Moon-hee-ehn) literally means Little Monk because the city was founded by monks in the Middle Ages. And after walking around on cobblestone streets in die Aldstadt (the historic district) or passing the stone structures of die Kirchen (the churches) the cute nickname, Little Monk, seems very fitting especially since everyone is exceptionally kind and friendly. But my favorite thing about München is the easily accessible vegan food. 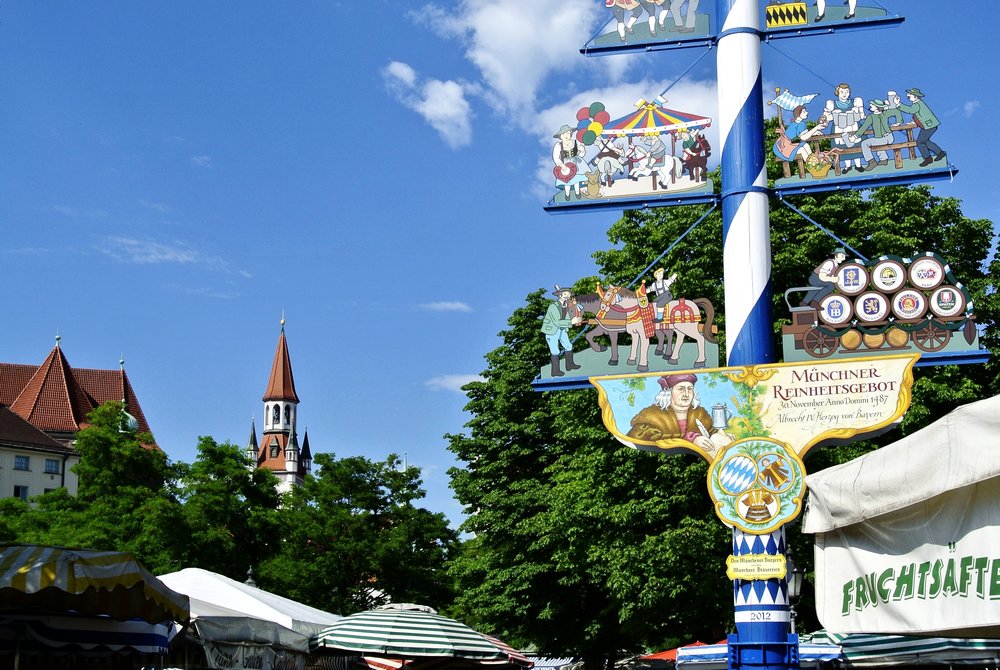 When I think of Germany, I think of drinking ein bier in der Biergarten (the beer garden) or of eating eine Brezel (a pretzel) as I walk through der Markt (the market). But eating vegan in Germany? Is that possible when classic Bavarian dishes like Schnitzel (breaded pork), Wurst (sausage), and Käsespätzle (a cheesy pasta dish) are predominantly the only options on the menu? Well, Vegetarian and Vegan meals are becoming more popular among the German diet and Munich is a city that is fully embracing this healthier lifestyle.

Our first restaurant is located in between Munchen Hauptbahnhof (Munich train station) and Marienplatz (city center). Max Pett and his wife opened Max Pett … Das Vegane Restaurant in 2015 with the intention to make everything on the menu completely vegan. And not only is everything on the menu plant-based, it’s also delicious. For meine Vorspeise (my appetizer), I ordered the Barbecue Tempeh served with kimchi and a dill dip. Tempeh tends to be one of those hit or miss vegan foods, but if you are a fan of barbecue then I highly recommend giving this appetizer a try. It is served with a nice, crispy exterior reminiscent to barbecue chicken but the tempeh is prominently a smoky flavor of spices and lentils.

What made this appetizer stand out and elevate to the next level was the unique combination of putting a touch of kimchi (Korean pickled cabbage, cucumber, scallion, and radishes) and a creamy dill dip on top. The bitter tartness of the Kimchi contrasted with the mild, yogurt-inspired dill dip and created a whole new flavor that was truly unique. And for der Hauptspeise (the main course), I ordered the classic Bavarian dish, Käsespätzle. The best way to describe this dish is to simply call it the German mac & cheese. But it’s so much more than that. It’s not like American mac & cheese which has a creamy cheese sauce, this dish has beautiful dumpling noodles that are made by simply pinching little drops of flour dough covered in a thin layer of finely shredded melted cheese. But beware, this dish in other German restaurants is not vegan. It is typically made with an egg noodle, buttermilk, and cheese, which makes Max Pett’s vegan version even more of an amazing feat. Every restaurant tops their Käsespätzle with different garnishments and at Max Pett it is topped with fried onions and fresh green onions. One bite of this dish and you’ve truly tasted some of the best food Germany has to offer in a beautiful vegan version.

To truly enjoy München, I recommend taking a walk through one of the gardens like the famous Englischer Garten or if it’s a nice summer day to go to the Isar River which runs through the city. Go to one of the local beaches to relax and enjoy the water freshly melted from the mountains.

Across town, my second pick for Munich is a restaurant called Vegelangelo which takes classic European dishes from Germany, France, and Italy and makes them into vegetarian and vegan possibilities. The nice thing about this place is that it is very close to the city center Marienplatz with only a ten-minute walk. However, you do need to make a reservation one day (or more) in advance. And trust me, you are going to want to stop by this place for a tasty vegan eat, but don’t just take my word for it, contact information is below. As soon as you step foot inside Vegelangelo you’ll notice the Italian-inspired, classical, posh interior with the velvety red walls and crystal chandelier. You feel transformed as if you are almost dining in a different time, but the elegant design further reflects the decadence of the meal you’re about to eat.

There are many enticing options on the menu, but what caught my interest was the vegan Truffle Risotto. I was hesitant at first to order the risotto because the last time I had it was in Paris a few years ago when I was a vegetarian. My main concern was would I enjoy a Vegan version that didn’t contain the signature dairy creaminess I had come to love with this dish? But I really had nothing to worry about. The creaminess was still there but prepared differently with a puree of almond milk and pine nuts, which gave the dish a delicious nutty flavor that complimented the truffles. The best way to describe the texture is it melted like butter (vegan butter, of course) in your mouth.

This is one of their pricier options at 18 euros, but there are plenty of both vegan and vegetarian dishes that are pretty affordable averaging around 12 euros. The only way to top off this fancy dish is to have an even fancier dessert. So, I ordered the vegan chocolate mousse which had this wonderfully whipped, fluffy texture and extra rich dark chocolate flavor. And I don’t know how they did it, but they even managed to top it off with a dollop of vegan whipped cream.

Because Munich is an easy city to get around, it’s very easy to see all of Munich in a couple of days, so if you have a day to spare I recommend booking a tour to visit Neuschwanstein Castle in southern Bavaria. You get a lovely drive seeing the German rolling hills and landscape, passing by a few villages, and then you get to see the castle that inspired Walt Disney’s own castle design. It’s simply beautiful and a nice little day adventure to get out of the city for a bit.

Other Vegan Restaurants in Munich: