To continue our wonderful voyage in London, we will try some of the diverse food in the city so you can get a bigger taste of what London has to offer for vegans. One thing I learned while living in London is the city is an epicenter of diversity since it has so many people of various cultures and ethnicities from all over the world living there. So, these tasty restaurants may not be the obvious plant-based food you’d expect but they make for great Vegan Eats.

An absolute must-try when you come to London is the Indian food. As I fondly say to my friends, “If you want the best Indian food, you have to go to London.” The great thing about Indian restaurants is the already available vegetarian and vegan meals as well as meat options, since these dietary options are already integrated into classic staples of Indian cuisine. But for my pick I recommend the restaurant Sagar which only serves vegetarian and vegan options focusing on Indian cuisine from the southern region of India.

When you enter Sagar, the dim lighting and brightly decorated walls transport you from the busy of Covent Garden (a marketplace filled with cute shops, street performers and many places to eat) to a quaint Indian village. 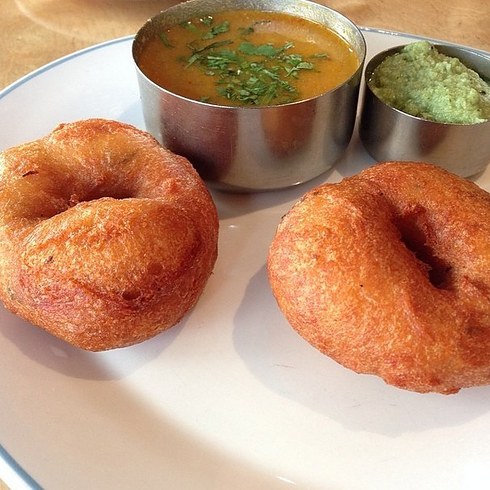 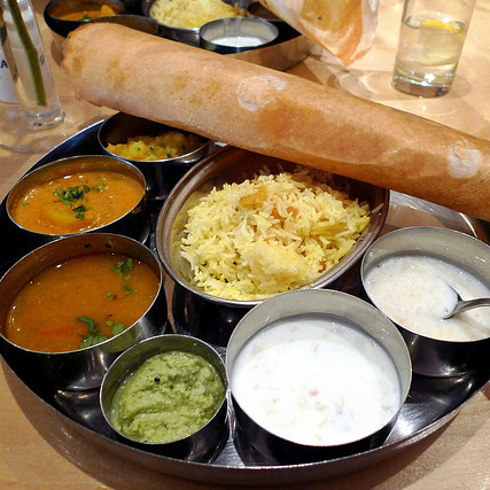 For an appetizer, I ordered their infamous Sagar doughnuts. Unlike traditional American doughnuts, these deep-fried circles of dough are savory, not sweet. The dough is infused with herbs and seasoning before being fried. The dish is served with doughnuts fresh out of the fryer and a trio of dipping sauces consisting of a basil, pine nut, garlic sauce, a mango chutney sauce, and a yogurt sauce with dill. If you are a vegan, you can simply ask for the dish without the yogurt dip like I did. Just tear little, fluffy pieces of dough and dip into the sauces and you’re in for a unique and savory bite. And no meal is complete in London without a little curry. This dish is so beloved by the English you’ll often find it on the menu in English restaurants and pubs. For my entrée, I ordered a chickpea and vegetable curry with yellow sauce. The curry was deliciously seasoned with tarragon and saffron and served over jasmine rice.

As wonderful as it is to dine in restaurants, sometimes after travelling for a while you can get sick of it. The good thing about Sagar, or most restaurants in London for that matter, is that the food can be ordered for take-away (to-go). So, whether you’re staying in a hotel or hostel, or you just want to eat in one of the beautiful London parks, you’ll be able to take your food with you anywhere you go. Take-away is so popular amongst Londoners that the newest trend popping up is Sushi to-go. You can get Sushi to-go anywhere – at the grocery store Tesco’s or at the sushi fast-food chain Izzy’s. Since take-away sushi is so popular, my next recommended restaurant offers the wonderful benefits of sushi to-go as well as being vegan.

Itadaki Zen is a vegan restaurant that specializes in Japanese cuisine. It might sound weird, considering Japanese cuisine contains a lot of fish ingredients, however this place proves that not all Japanese cuisine needs fish. There are many creative dishes on the menu such as the vegetable roll (carrot, cucumber, avocado, and pickled cabbage) or the ramen (a vegetable broth base with sweet potato noodles and vegetables). But what caught my eye was the Tempura Burger. I love tempura as much as the next person, but on a burger? I had to try it out. The “patty” is lightly breaded with panko and fried vegetables on a sesame seed bun. But no burger condiments are served on this. Instead, a sesame sauce with garlic and green onions is served in a little dish on the side for you to dip the burger in. At first, texturally, it was a little weird for me to dip my burger in the sauce, mainly because I’m not used to doing that. But the sauce is necessary to balance out the flavor and not make the dish too dry or too plain. It’s a subtle note but it perfectly completes the palate by adding that extra special umami flavor. And like most take-away restaurants, the pricing here is affordable. Whether you dine in or take-away, you will surely get your penny’s worth here.

If you are interested in tasting some more food that comes from around the world, then I highly recommend visiting the Borough Market. This is one of the oldest markets in London dating back to the Victorian era, and with its location under a train line it has beautiful iron beams that take you back to the steam age. You can find everything here from blooming flowers, freshly baked bread, mushrooms of every color, and more importantly, dishes from all over the world. In one section of the market, there are food stalls with food freshly prepared and cooked right in front of you.

Delights range from Jamaican street food, authentic German bratwursts, tasty Assyrian cuisine, to Indian food. It’s the closest you can get to the real thing, without the hassle of packing your bags and flying on a plane there. In fact, most of the vendors are immigrants to London or second-generation Londoners adhering to their family secret recipes. So, you know it will be good! The only downside is there aren’t many spots to sit down and eat. But then again, you can be a true Londoner by eating and walking at the same time. As you eat and walk around you can continue to look around at other stalls. Not only is this market affordable, it has food options for every type of eater – meat-eater, dairy-free, vegetarian, vegan, gluten free. All you have to do is simply look around to find it or ask a vendor about their dietary options.

But let’s not forget about dessert! If you are planning on traveling to London during the summer, then be prepared for the heat with nice, cool ice cream at Cookies and Scream.

I simply ordered the caramel vanilla bean ice cream with a little drizzle of vegan caramel sauce and cherry on top. But if you really want to live dangerously then I recommend having the donut cream sandwiches. That’s right, ice scream scoops in between two fluffy, vegan donuts of your choice.