If you are planning on traveling to Europe this summer, then London is by far one of the cities you need to experience. I might be biased since I lived there for a year, but trust me it’s a city that will pleasantly surprise you with good weather (contrary to the rumors of grey skies), a beautifully rich history, and of course the best Vegan Eats. This blog post will be divided into two parts since it’s a big city with so many vegan restaurants to choose from and so many free activities to do during your visit.

When I think of British food, I think of the typical dishes like Beef Wellington or Fish and Chips. So basically, meat arranged in some sort of concoction of that sort, which means that it is not vegan friendly. But do not fret because I found restaurants that serve vegan versions of these dishes plus so much more.

First up is the first and only Vegan Pub in all of England – The Coach and Horses. That’s right, you read correctly – A Vegan Pub. Sounds too good to be true? Well, you better believe it because it is indeed a very real thing. The Coach and Horses is an all vegan pub that serves traditional British dishes like the classic Fish and Chips, which is what I ordered when I was there. But what makes this pub, as well as all British pubs, unique is the fact that the buildings where these pubs are nestled in are old converted homes ranging from the 19th – early 20th century. As you walk inside, pushing past the heavy wooden door, you see a narrow little hallway with dim lighting that leads you straight to the bar. As you walk down the corridor, you’ll see open doorways leading to little salon rooms where other customers are tucked away. In most pubs, like this place, you can sit anywhere you want without needing a hostess. You can choose to sit at the bar area where there’s a small number of stools or at a few cluttered tables in the room, or you can opt for one of the semi-private salon rooms. If you’re like me, you’ll choose a salon room where you can kick up your legs and rest from the insane amount of walking you did to get around the city. And in the winter, if you’re lucky, you’ll choose a salon room where there’s a wood burning stove in it to heat you up.

And when your Fish and Chips arrive at your table, with a pint of beer if that’s your taste, you will feel quintessentially British, especially if you say “Cheers” instead of “Thanks”. The fish portion of my fish was tofu wrapped in nori (to resemble fish skin) and deep fried. The nori (seaweed) was a perfect touch which gave a similar fish taste infused into the tofu. And the dish was served with a side of chips (fries), peas, vegan Tartar sauce and half a lemon to freshly squeeze onto the “fish”. The Victorian décor of the pub, including the blue willow chinaware my dish came on, plus the historic building made me feel like I was transported from contemporary day to Victorian England, and once you try this place out you will feel the same way.

And one of the many free things that I recommend doing is going to St. Dunstan in the East Church Garden. This 13th century medieval church was bombed during WWII, but instead of rebuilding the church it was converted into a little park. The old stone structure and foundation of the church remain and the greenery growing alongside the stone gives off this magical secret garden vibe. It is very easy to miss since it is tucked in between skyscrapers, but it truly is peaceful despite its city center location. 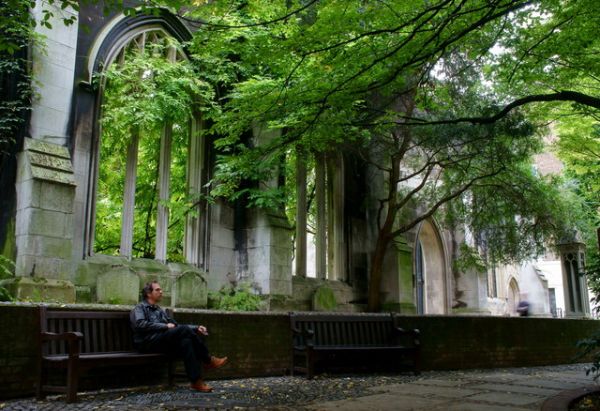 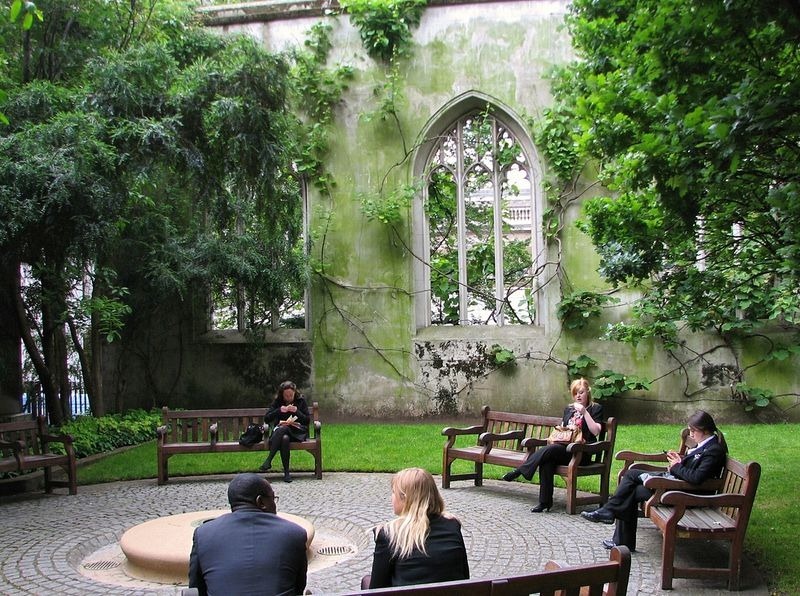 If you love posting pictures to social media, this place is amazing, practically #Instagram goals. But the great thing about its location is it’s only a couple of blocks away from Tower Bridge (aka London Bridge), which you can walk across if you like, and Tower of London (the crown jewels’ current home).

For my second pick in London, I highly recommend Greenz Restaurant. This vegan restaurant offers both classic British dishes as well as some more contemporary British cuisine such as curries. But for my selection I ordered the Mushroom and Seitan Wellington. This vegan take on the traditional Beef Wellington is completely transformed into a delightful bite of a “beef” stew wrapped up in a puff pastry. And yes, the puff pastry is also vegan. No eggs, butter, or milk was used in this tasty dish.

When this dish came out, the wellington was carefully placed in the center of the plate with a beautifully bright green pea puree underneath it and a touch of steamed spinach dressing the sides. One bite of this dish contains the fluffy and flakey exterior texture of the puff pastry and the savory taste of mushrooms, seitan, carrots, and onions in a brown gravy sauce inside. If you’re not drooling yet, just wait until I talk about dessert. This place as well as The Coaches and Horses pub are averagely priced with meals costing about 14 pounds. And if you still have energy after eating such an amazing and filling meal, I recommend going to any of the public museums in London since they are all free. Beware though, only the public museums are free not the private ones. I’ve left a list below of public museums in London to check out as well as underground stops since the Tube is the easiest way to get around London during the day.

Now, you might have noticed that I didn’t get dessert at any of these vegan restaurants. Not because they didn’t have any tasty bites, but when you are in a city like London, where there are hundreds of bakeries and candy shops, I think the best finds are in the boutique shops instead of restaurants. My favorite bakery in London is a place called Ms. Cupcake. This bakery has many vegan options including cupcakes, brownies, and cookies.

When I was there I got a beautiful, yet gigantic, cupcake. The frosting was intricately designed to create swirls of roses. If you are a fan of frosting this place will not short you of that. And the cake portion was a soft, fluffy, chocolate delectable. This bakery is a little expensive with cupcakes ranging anywhere from 4 to 8 pounds, depending on the size and the amount of artistry that went into it. However, they do have other affordable options such as brownies and cookies which are just as good to accommodate a tighter budget.

Stay Tuned for London Part 2 coming soon, where I discuss a few more unlikely Vegan Eats to be found in London.