Las Vegas is a very accommodating place to people from different backgrounds, including dietary backgrounds. People from all over the world come to Vegas, so it makes sense that this city would be accommodating to all sorts of customs. But one custom that Vegas is known for is their buffets. And that’s right, Vegas even has a buffet with vegan food.

My first recommendation is The Buffet at Wynn Las Vegas. This buffet is known for being very luxurious with only the best and freshest food. The buffet has captured the attention of many meat-lovers, but the reason it has captured my attention is because it’s the only buffet with a vegan menu. As you enter The Buffet, you are immediately transported into a colorful, playful room where flowers float from the ceiling and tea kettles and other kitchen objects are ornately arranged with flowers in bouquets. It feels a lot like stepping into the Mad Hatter’s tea party in Alice in Wonderland. And after being seated, your server will take you to the buffet, which spans over 4 rooms, where you will be introduced to the head chef. The head chef will then give you a personal guided tour of the buffet pointing out what is vegan, because many items that are vegan have to be requested at stations since they are not displayed.

My favorite dish was the vegan cranberry muffins, which had these airy, delicious rice-Krispy-like cereal bits in it. I also had the vegan blueberry pancakes, which were amazing. But, you can customize the pancakes to be whatever you wish, I just happened to order blueberries in mine. I tried the vegan matcha chia pudding which was very interesting and different from anything I had before. And if you are a juice or smoothie enthusiast, then you’ll love all the concoctions they make here. I think I must’ve had four of them. This buffet has anything and everything you could possibly ask for.

For my second plate back at the buffet, I had the vegan sushi which I customized with cucumbers, carrots, avocado, and pickled cabbage with a side of veggie spring rolls. And for dessert I had the chocolate and raspberry sorbet with a vegan chocolate chip cookie. As you can see, I made sure to get my money’s worth out of this dining experience. Eating here for breakfast is about $25 per person, and if you are a big eater like me, then you’ll get a lot of tasty food to fill you up for the day.

Vegas Fun Fact: Steve Wynn (owner of the Wynn and Encore Las Vegas) is a vegan, which is why all the restaurants in his hotels have a vegan menu in addition to their regular menus. All you have to do is tell the hostess that you would like a vegan menu. Make sure to check out these menus online to see what might interest you. I’ve heard the steakhouse at the Wynn has an amazing truffle risotto and a delicious Portobello “steak.” 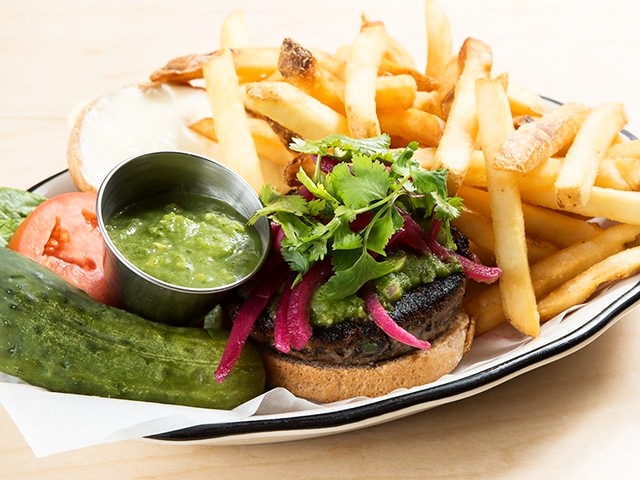 My next recommendation is a place that is more suitable if you are with a group that might not eat vegan, but you do. In the Grand Canals at The Venetian, there is a great restaurant called Black Tap Burgers. It’s a great spot to grab a good burger and beer, but what’s surprising is that they offer a lot of vegan options as well. I ordered the Vegan Burger which comes with a black bean patty, vegan mayo, pickled onions, salsa verde, and cilantro with a side of fries. And, if you are gluten-free, then you can also order your burger with a gluten-free bun. This burger was surprisingly juicy for a black bean patty and the salsa added a fun twist to an old classic.

Although fries are a classic side to the burger, I decided to try some of their other snacks and sides that also happened to be vegan. I shared the teriyaki broccoli which was seasoned with ginger, garlic, sesame, and scallion. And, because I couldn’t resist one more side, I also had the crispy brussels sprouts which came with a sesame-tahini dipping sauce. These sides were just as amazing as the burger, so make sure not to skip these extras. They also have other vegan options like their burger bowl served with quinoa and a black bean patty. The really nice thing about this place, was that I could comfortably get what I wanted while my non-vegan husband ordered a regular burger. And since it’s in the Grand Canals, you get to see one of the coolest and unique places in Las Vegas.

My trip to Vegas was short and sweet, so I didn’t get a chance to try every vegan restaurant. However, below is a list of other restaurants in Las Vegas that have vegan menus that I’ll definitely be trying next time I visit.